Ken Beames was one of Australia's most remarkable telescope makers of the 1930's, 40's & 50's1. Born in 1899 in Gilgandra a farming town in Western New South Wales, Ken lived through the not only some of history's most turbulent times, but also through a period of dramatic technological development.

Having worked as a telegraph operator for the Post Office in Gilgandra, Ken joined the Armed forces in World War I as a signaller in the Australian Light Horse serving in Palestine2.

On his return from the war, Ken trained at Sydney Technical College as a machinist and in electrical trades. After completing his trades he founded his own business manufacturing radio receivers, gaskets and various items.

Around 1930 he was introduced to astronomy, and the art of telescope making. His first telescope displayed such ingenuity that an article was published in the Sydney Morning Herald. He had established his reputation for instrument making, and from that time produced a wide variety of telescopes and other instruments. In 1938 he began construction of the 61cm (24") reflecting telescope.

The outbreak of war in 1939 interupted work on the telescope, but not Ken's production of optical work. During WWII he produced reflectors and sighting telescopes for Navy signal lamps, mass producing lenses on machinery of his own construction. During war shortages he even made his own optical glass. 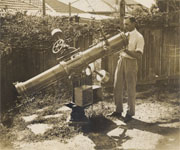 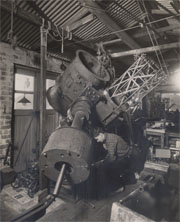 1 "Ken Beames - Telescope Maker Extraordinaire" British Astronomical Association Journal 1997 by Wayne Orchiston
2 As a proportion of the population, more people from Gilgandra enlisted for WWI than from any other town in the Commonwealth.